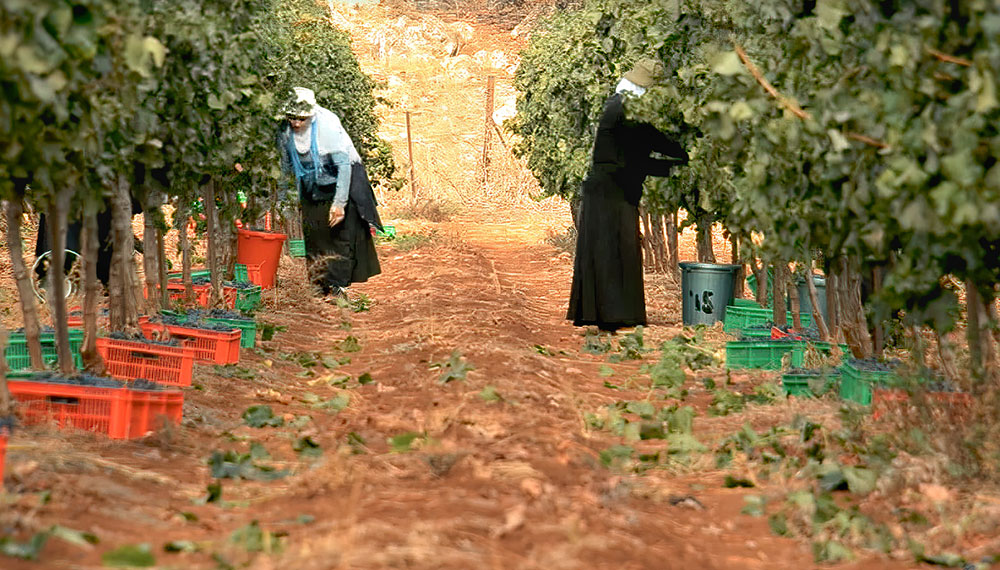 “Wait while my husband puts on his shoes…”

Ramot Naftali is an agricultural moshav in the Upper Galilee lying two miles southeast of Israel’s border with Lebanon. Upon a breezy hilltop overlooking the Hula Valley, a scant fifteen miles from the Syrian border and only fifty miles from the fated city of Damascus, the tiny kibbutz was founded in 1945 by liberated members of the Palmach, the elite fighting force of Israel’s underground army during the British Mandate.

Like so many small communities in northern Israel and the Shomron, Ramot Naftali’s past—and sometimes its present—has a distinct, wild-west, frontier town flavor. Almost continually under fire during the 1948 Arab–Israeli War, it is now better known for its apples, peaches and grapes than for its storied heroic defense efforts though, by any standard, it is still a rowdy place to farm.

Occupying only about 200 acres, the moshav remains, for the most part, an agricultural concern but some of Ramot Naftali’s members cater to tourism. There are at least four boutique wineries located in Ramot Naftali, small producers who open their doors to tourists for sampling and conversation; time well spent for wine lovers, for Ramot Naftali’s grapes are highly regarded by experts worldwide and sold to wineries throughout Israel.

Marcia and I visited the historic moshav in full tourist mode one day last year just after Israel began to expose and destroy Hezbollah-built cross-border tunnels, also sometimes aptly referred to as “attack tunnels” but, judging from the tourist buses in town, the slow-paced traffic in the street, and the relaxed demeanor of the moshav’s residents, the day we arrived was, in their eyes, no different than any other.

We had made no appointments. Our plan, if it could be called a plan (and, yes, on second thought, it can be called exactly that in Israel) was to rely on our little map of the moshav, find a couple of boutique wineries, knock on their doors and see what happened.

It worked to perfection. On one visit we parked on an unexceptional neighborhood street across from a normal looking house and yard with grass and shrubs which, according to our map, was the headquarters of the Amram Winery. There may have been a small sign beside the front door, I don’t remember, but the placed looked more like a private residence—like grandma’s house—than a business.

We knocked on the door (sticking to our plan) and, after a modest interval, a sweet old lady greeted us. In our broken Hebrew, Marcia and I explained that we came to sample their well-known wine!

Of course. No big deal. We waited, as instructed, while the vintner himself, Amram Azulai, put on his shoes while sitting on the sofa in front of a television, then we followed him back outside, down a few steps, then we dipped under a small metal door frame (about five feet in height) leading to a small, underground cellar.

Amram flipped on the lights, pointed to several shelves stocked with wine and a posted price list. “What would you like to try?” he asked, and we were on our way. So we tasted wine—exceptional as advertised—cleared our palettes with free pretzels between samples and eventually bought a few bottles.

Amram wished us a good day after a round of thanks then headed back up the stairs to his living room where, we supposed, he took of his shoes again and continued to watch TV.

“One of those tunnels passes under his grapes…”

We found the also-highly-regarded Na’aman Winery just a two-minute drive away. Though Na’aman had a normal business look; a nice store front, a dedicated office space and signage, no one was there. The business was closed, midday.

I was ready to move on but Marcia pointed to a sign; Call this number for an appointment.

“I can be there in fifteen minutes,” Rami Na’Aman, the vintner, told Marcia. (We American immigrants explain such odd encounters we experience here so often by labeling them, so Israeli.)

While we waited, we crossed the road and looked down, quite a way, at the once malarial Hula Valley, formerly Lake Hula (prior to its draining), now a major stopover for birds migrating between Africa, Europe, and Asia. To our left and right were acres of rolling hills cultivated with endless rows of latter-day vines, just as the prophets had promised.

Wine making in Israel is much more a lifestyle than an enterprise. Rami, and eventually his wife, Batina, spent over two hours with us that day chatting, sharing stories, asking questions… The wine was splendid, the conversation and our hosts’ congeniality were better. Conversation eventually turned to the state of the world, Israel’s multiple existential threats and, of course, lying only a few miles away, Hezbollah’s wicked attack tunnels.

“Yes,” Rami said, munching a pretzel. “My good friend has a winery just a couple miles north of here. One of those tunnels passes directly under his grapes.”

We expressed our thankfulness that the tunnel had been discovered and no one was harmed.

Rami nodded, shrugged, slid the pretzel bowl closer to us then suggested that we sample another of his excellent wines.