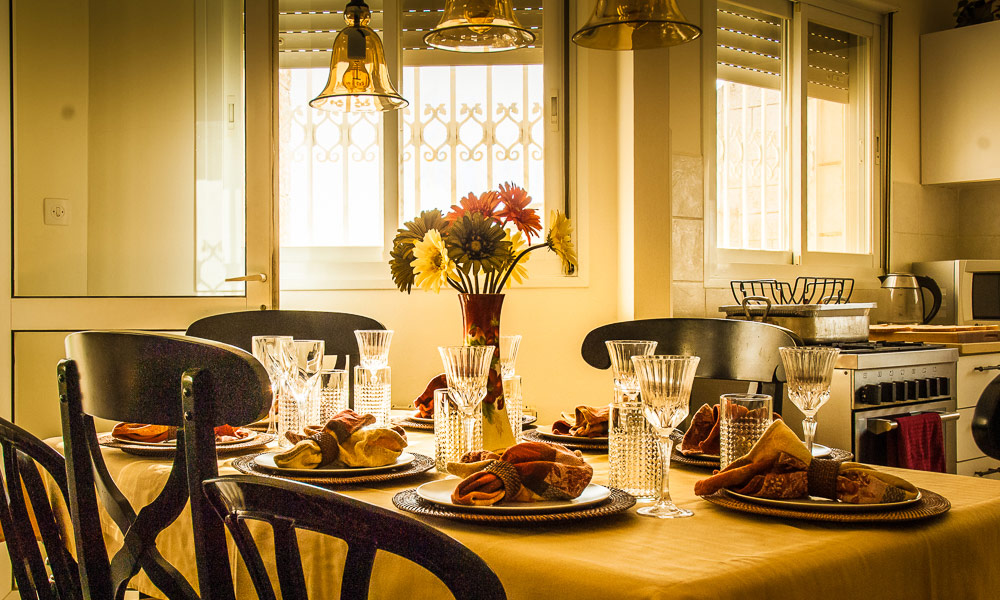 Thanksgiving morning in Jerusalem, 2020, with our turkey properly stuffed and roasting in the oven, Marcia and I got a call from a British expat in town with whom we were doing business. “Good morning!” he began, “why don’t you chaps come down to the office this morning? I’ve got a car for you to look at.”

I would have liked to ask if the phrase fourth Thursday of November rang a bell but instead took the high road. “You’ve called on the morning of what we Yanks call Thanksgiving. A tradition that pretty much absorbs the whole day.”

“We Brits are thankful every day,” he came back, intending to be humorous, but his daily angle struck a chord with me. For further insight into thankfulness, I turned to a resource often called here Rabbi Google. Though pleased to find that the term Thanksgiving in Israel appeared to pass Google’s famously unbiased fact-checkers without objection, I was disappointed to learn that Wikipedia (and others) had ignored or entirely missed the mark regarding the day in the Land.

With due respect, Thanksgiving is not an Anglo-Saxon celebration; it is uniquely American. And it’s not Sukkot, though some see similarities.

When Americans attempt to celebrate Thanksgiving in Asia Minor, circumstance provides us with a cornucopia of opportunities, in the form of obstacles to overcome, to grow more thankful. This is the land of small ovens. No one here has ever seen or cares to see a brining bag, for example, or ever heard the word giblets spoken aloud.

In the fall, new immigrants to Israel first begin to realize that their first November in the Land may be unlike any other when they start to prepare for Thanksgiving. Slowly, slowly, as Israelis say, the bigger supermarkets in Israel have begun to stock Thanksgiving turkeys in response to increasing demand but have not yet quite caught on to the holiday’s essence.

Their promotions, though rare, are unique. Years ago while shopping, Marcia watched amazed as a huge Arab butcher walked through his employer’s aisles cradling an enormous, unwrapped bird in his arms—legs and wings flailing—touting the holiday to curious shoppers in descriptive Hebrew.

But we press on, like the original pilgrims long ago across the sea, by befriending the natives. Early each November in Jerusalem (by necessity, because a successful Thanksgiving meal in Israel remains a moving target), Americans share reconnaissance. One friend tells of a high quality, turkey-friendly butcher shop in German Colony. Another knows of a grocery on Hevron Road that sells lots of American brands. There is a Russian store in Kiryat Menachem that stocks frozen cranberries, forget fresh, and we learn of an online bakery that delivers “real” Jewish rye to your door!

Step two, and perhaps the more difficult, is to somehow make clear to the Israeli vendors what exactly we’re trying to buy. This Thanksgiving, our tenth in the Land, we were thrilled to receive from our butcher a bird that weighed under 6 kilos. That may seem easy to do to the uninitiated, but Israeli butchers consider delivered weight an act of providence, not note taking. (The first turkey we ordered in Jerusalem was the size of a small Rottweiler. We had to—no kidding—tie its legs to the side so we could close the oven door.)

The birds themselves are different too. Butterballs in Israel are mythical, like unicorns. There are no self-basting turkeys, none impaled with pop-up timers (which never work anyway) and, though there exists a Hebrew phrase that translates as “giblets,” we’ve never received a bird with heart, liver and gizzard intact.

Time to pause and be thankful. They always come fresh, with their necks attached.

Once the obstacles to obtaining provisions are overcome it’s time to celebrate, not only with fellow Americans but often with British expats and/or curious Israeli sabras. For the last few years Marcia and I have doubled down on Thanksgiving by serving dinner at our place on Thursday then celebrating again at the home of friends on Erev Shabbat. And are thus doubly reminded of our blessings.

Charles Spurgeon, agreeing with our British friend, thankful every day, once preached upon Thanksgiving…

“All the year round, every hour of every day, G-d is richly blessing us; both when we sleep and when we wake, his mercy waits upon us. The sun may leave off shining, but our God will never cease to cheer his children with his love.”