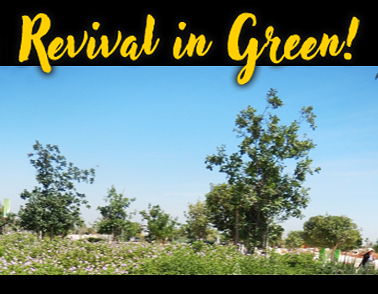 Spread the love
Writing about the Holy Land after his 1867 visit, Mark Twain described it as “rocky and bare, repulsive and dreary…with hardly a tree or shrub anywhere… a rocky, barren, hopeless and heartbroken land.” The first wave of pioneers from Europe in the late 1800s, reclaiming their ancient and ancestral homeland, set to work to change that. By toil and sweat, through generous monetary donations, by trial and error, and with the help of G-d, these tenacious Jewish settlers transformed the desert into a green and productive country. They drained swampland. They cleared rocks. They irrigated barren lands. They planted forests, orchards, vineyards, and crops. In realization of Biblical prophecy, the Land of Israel welcomed her people home by transforming into a lush and fertile country.

Even before 1948, Israel’s first prime minister David Ben Gurion had a dream of turning the vast Negev Desert green. With incredible vision, KKL-JNF (Keren Keyemet l’Yisrael—Jewish National Fund) has worked since 1901 with the people of Israel to plant over 250 million trees throughout the Land. One of the greatest endeavors has been Israel’s largest, completely planted desert forest—the Yatir/Lahav Forest—the only one of its kind in the world. Butting up against the Hebron Mountains (and the “West Bank”) in the Negev northeast of Beersheva, the forest is 30 square kilometers. Yatir is described in Joshua 21, a Levite city whose ruins are found in the heart of the woods. This forestation project started in 1964 as a grand experiment.